Last days in Richmond and the working zine description

Greetings from Richmond! Nicole has a spare room for me. With a bed! With sheets! I haven’t slept with sheets since I left! The Richmond zine fair was Friday night and all day yesterday. I’ll write more about it later. Last night we played and awesome game of Apples to Apples and had a lot of fun. nicole took me to a bottle shop and I geeked out over all the beers I had never tried.

I head home tomorrow. I was feeling really homesick at the zine fair yesterday and wondering if I could get a sooner ticket home since my plane ticket is for Monday. I decided to stick it out. Here’s the working description for brainscan 24 and 25. I’ll post more when I’m home and they are available.

This zine has been five start and stop years in the making. I finally finished it in October of 2009 at the Anchor Archive zine residency in Halifax, Nova Scotia.

Brainscan 25 Chronicles my Saturn return as a love story, an ending, and a new beginning with someone from my past. The Saturn Return is the time between ages 27 and 30 when the planet Saturn is in the same place it was at your birth. It is usually seen as a harbinger of change and a test of character where individuals are forced to evaluate their life in relation to their values. Brainscan 25 documents my life between 2004 and 2006 which was full of upheaval and questioning my path and choices in life. The linear story is spliced with narrative flashbacks from 1996-1999 full of punk shows, travel stories and the difficulty of dealing with emotions and the insecurities of growing up. Text heavy with high contrast cut and paste layout and photocopier art.

Brainscan 24 is a mini zine with answers to questions I’m frequently asked and random facts like how I was made in Canada, am left handed, and was the very first Aquacadet. 32 pages and 1/8th legal (3.5″ x 4.25″)

These two zines together will be $5 plus $2 shipping for a total of $7. I feel sort of bad for the price but the zine is 80 pages and the copies I have now cost over $3 each to make. 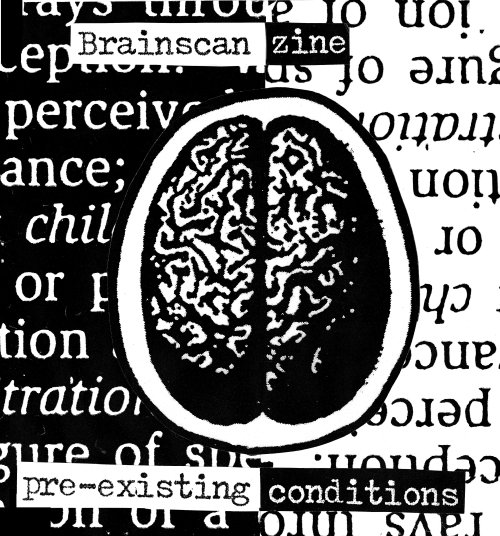 I just found a little time to sit down and take a listen to the interviews I had recorded and hoped to finally put together for a new episode of Nobody Cares About Your Stupid Zine Podcast. I had been editing it on my old computer before I left for the Uk and France in May. My old computer was dying a slow death and I transferred stuff to my new computer. Well, the audio sounds all messed up with weird gaps in the middle of interviews. I’m really bummed because I think most of it is unusable. It might be that I really just don’t like sound editing but I want a good sounding podcast, not one that sounds like it was recorded in a bathroom with a Fisher Price microphone. Gr.

I had some really great interviews too so I’ll see what I can salvage when I’m less annoyed about it. We had some great interviews at the Zine Librarian (un)Conference from the spring.  Marc and I interviewed Jerrianne from Zine World and Zine Wiki. She got Marc to tell a great story about the first time they met. I interviewed Milo from QZAP (Queer Zine Archive Project) he also gave me a cool shirt that says “Zinesters do it on the photcopier” I also did a bit of investigative journalism to try and uncover just what exactly happened to ZAPP in their mysterious disappearance a few years ago. I interviewed a few people and the audio is semi-rubbis. It was on the steps of the Hugo House and there are all these birds tweeting in the background.

So, do I start all over again with new interviews? I need to get Marc to sit down again and record some stuff. We decided that we are never ever going to apologize for the lateness of our podcast. It’s a podcast about zines, what do you want from us?

A few months ago I was riding my bike home and rolled up onto my sidewalk where I saw my old housemate and old zine friend Steve. You may remember him from Journalsong zine. I did a split zine with him and Lisa from Three A.M. years ago. He was playing music with someone down the street and was walking by my house. He said it looks good since I fixed it up and then said he liked the podcast and asked when we were going to do another one. I asked him when he is going to do another zine. He then said “so, there isn’t going to be another one?” That wasn’t my point, my point is that my zines don’t come out regularly and neither will the podcast! I want to do it, I just don’t want to do it half assed.

So, I started thinking about my upcoming trip and how it is a bit like a tour. I didn’t really intend for it to be a tour, but maybe I should. Paul and Webly and I are going to Chicago the weekend of October 9th. Maybe I should see if there is any zine stuff going on there? Then I’m headed to Halifax for my zine residency and the Halifax Zine Fest where I’ll teach a workshop on zine distribution. From there I head to Toronto then I think I’m going  to Ottawa for a zine reading at a book store on October 30. After that I’ll be at Canzine in Toronto on November 1st where I have been asked to do a reading the night before. Maybe I should read something spooky for Halloween!

After that I have a week between Canzine and the Richmond Zine Fest. I’m thinking of visiting NYC, maybe I should do a zine reading there? Anybody else have any ideas?

2009 has totally been a crazy zine year for me. I’m really excited about it. I just wish I could get a new zine done! i have about 3 of them in the works.

I just four of that my application for the Anchor Archive Zine Residency for 2009 was acceted! It looks like I’ll be spending two weeks in Halifax, Nova Scotia submersing myself in zine more than usual! I have been accepted for October which I imagine will be chilly in Eastern Canada but it will be awesome!

I have been kicking around the skeletons of the twists and turns of the love story between Paul and I which is also the flipside, of Brainscan 21. I’m hoping that the love story will make the crawling out of an abusive relationship more palletable… or vice versa if you are into that sort of thing. It has been extremely difficult to write because there is so much history, arguably 12-17 years of it. It is hard to write about something and sort out the important bits when there is just so much.

Paul has been working on the original soundtrack for the zine and he is basically done with his part. It loosely tells his story. Some of the music is here if you wanna listen to it and the whole thing ends with a song where I sing back up with a fitting chorus “There’s a lot in life you can’t explain” I’m hoping that a continent’s distance will give me space to write and time to miss him and really reflect and remember what that deep sense of space felt like.

I don’t think they have a photocopier which sort of puts a damper on the layout process. I already have the cover and even the size the zine will be. it will be half legal sized with vellum or transparency covers that have an image of a Brainscan and say: Pre-existing conditions. Strange that in almost 12 years of doing my zine I have never used and MRI on the cover, eh?

On top of all that I am hoping to first hit up the Richmond Zine Fest in Virginia for my second time. I had a lot of fun last time and met some awesome people… and one adorable dog. I’m also excited to try to go to CanZine in Toronto. I have never been to Canzine or Toronto for that matter! Oooo and maybe I can go to West Virginia! I have now been to ever state but West Virginia, I’m going to have to start working on provinces next!

It is looking to be a gloomy day in Portland so I’m going to force myself out of bed to get down to my office for some work and also make some tofu scramble and vegan biscuits and gravy.